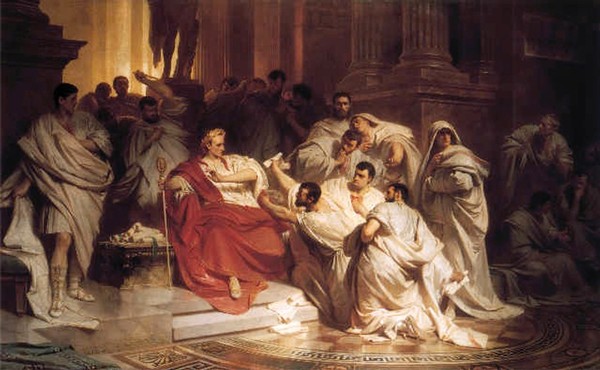 Julius Caesar: The Ides of March are come.
Soothsayer: Ay, Caesar, but not gone.

The Ides of March, or 15th of March, is a day that has gone down in infamy as the date Cassius, Brutus, and the rest of the self-styled Liberatores of the Roman Senate assassinated Julius Caesar, the famed general and dictator of Rome. From Plutarch to Suetonius, from the stage of Shakespeare's Globe to HBO's Rome, this story of politics, fear, betrayal and blood has been told and retold over the years, emphases and sympathies changing with the ideologies of the times, but we can know a few things for certain.

From the post-mortem report (the earliest autopsy in recorded history, CSI fans), we know that Caesar was stabbed 23 times, but that only one of the wounds was considered serious enough to have been fatal. From the historical record we know that while the conspirators' intended goal was to protect the Roman Republic from becoming a monarchy, this act of violence instead directly (and ironically) led to the dissolution of the Senate and the establishment of the Roman Empire. And from the modern-day populace of Rome we know that the murder of Caesar in the Capitol is as deeply etched into the very consciousness of Rome itself as the great paintings of Raphael, the hulking grandeur of the Colosseum, or the delicious legacy of Roman - or Laziale - cuisine.

While the rich of Ancient Rome ate a widely varied diet from all over the lands they had conquered (including such gruesome demonstrations of wealth and power as large pastries filled with thousands of wrens' tongues), your average Roman ate rather simply, with just a handful of ingredients per recipe. With this in mind, we have created a authentically Roman meal of three simple courses to pair with our wines that would have been recognizable to Caesar and the Liberatores, but which can also be found at any resturant in Rome today. Enjoy them together for the full Roman feast experience, or a la carte for a more simple meal.

Von Holt Wines' 2012 Heintz Vineyard Chardonnay, which leads with its nose of honeysuckle and stone fruits and opens up into flavors of citrus-laced Asian pear and lemon custard, is the perfect match for this classic Roman dish of artichokes prepared simply with mint, parsley, and white table wine.

After chopping the herbs and mincing the garlic, combine them along with a pinch of salt and 1 tbsp. of the olive oil in a small bowl. Meanwhile, you'll want to splash a little vinegar or lemon or lime juice into a bowl of water. This will help keep the artichokes from turning brown during the trimming process.

Halve the artichokes across their bodies, discarding the tops, and remove the tough outer leaves, leaving the tender inner leaves intact. Remove all but an inch or so of the stems. With a spoon, paring knife, or other scooping/scraping tool, remove the purple "furry" chokes from the inside of each artichoke half and discard, putting the "cleaned" artichoke in the bowl of vinegared water. Once all the artichokes have sat in the water/vinegar mixture a couple minutes, remove and place in a deep pan, standing on their stems, in such a way that they are nestled snugly enough that none of them have room to fall over. If your only deep pan is too wide, buy one or two more artichokes and repeat the above steps, as standing upright is an important part of the cooking process (you will not mind the extra leftovers, trust us).

Place your pan over a medium flame. Pour the wine and remaining 3/4 c. olive oil over the standing artichokes, sprinkle them with another pinch of salt, and pour the boiling water over it all. Cover your pan and let simmer for 1 hour. These artichokes can be prepared ahead of time and are delicious at room temperature, but are also amazing hot right off the stove, especially if your glass of 2012 Heintz Vineyard Chardonnay is, not cold, but ever-so-slightly chilled.

Perhaps the simplest of all Roman cuisine, in that there are fundamentally only three ingredients, its very simplicity is what makes Spaghetti Cacio e Pepe one of the most difficult dishes to master. The key thing to keep in mind whenever working with only a few ingredients is that the ingredients themselves must be of the highest quality. Your black pepper MUST be freshly ground, the more aged you can find your Pecorino Romano the better, and while it is irrelevant whether you use fresh or dried pasta here (we'll give the recipe using the latter), the higher quality the initial pasta the better the final result. We've suggested spaghetti here as it works excellently with the sauce and is readily available, but if you want to dine like a true Roman, try and find some Tonnarelli, which is identical to spaghetti except that the noodles, looked at from above, are square rather than round.

While this meatless dish pairs splendidly with white wines, we prefer it with our 2012 Suacci Vineyard Pinot Noir. With its light body, it contrasts pleasingly in mouth feel with the melted cheese, and its hints of pomegranate give just enough tartness to balance the floral heat of the black pepper.

Bring unsalted water to boil in a tall pot while you finely grate the Pecorino cheese. The water should not exceed 3/4 of the pot's height. When the water boils, add the salt, but bear in mind that the Pecorino is a fairly salty cheese, so perhaps use half the amount you would normally in seasoning your pasta water. Add your pasta, and cook to al dente, uncovered, BUT, and this is a must to get the creamy texture of a true Roman Cacio e Pepe, during the last 1-2 minutes of boiling your noodles, cover the pot with the bowl you will be serving the pasta in to heat it.

Remove a ladleful or two of the now starchy pasta water and set it aside near your serving bowl while you drain the pasta. This starch will help the fats from the cheese to amalgamate well with both the pasta and the water. Transfer the drained pasta to the serving bowl you've heated. Gradually incorporate most of the cheese and some of the water into the pasta bowl tossing VIGOROUSLY until you get a creamy consistency, adding cheese when it becomes too watery and water if it begins to dry out. When it is creamy, add a generous amount of freshly ground black pepper and toss. Serve with the remaining 1/4 c. or so Pecorino for garnish, and refill the glass of 2012 Suacci Pinot you began while cooking. Buon appetito!

While our lighter Pinot pairs well with pasta, for our lamb course we had to go with Von Holt Wines' 2012 Pratt Vineyard Pinot Noir. Juicy on the attack, then opening inwards to more subtle cherry and cranberry flavors, the Pratt Pinot is excellent for any red meat. Also, with its bright ruby red coloring alongside the pinkish-red center of a properly cooked lamb chop, we're truly ending our Roman meal with the Ides of March theme... Brutus would be pleased.

Mix together the extra virgin olive oil, garlic, rosemary, salt, and pepper in a small bowl. Add lamb chops and marinate for 30 minutes, while you get in the mood with our Pratt Pinot. Meanwhile, heat up your grill, gas grill, or grill pan over a high flame.

Grill your lamb chops for 2-3 minutes on each side for medium rare, and plate and eat RIGHT off the grill (mind those burning fingers!) with lemon wedges squeezed over the top... in the words of Casca, the senator who stabbed Caesar first: "Speak hands, for me!"

Whether taken all together or enjoyed one at a time, we hope you find these recipes and wine pairings helpful, and enjoy the fruits of your labors with the fruits of ours! As always, let us know how you liked these food pairings in the comments section below, and stay tuned for our next installment in this series. Also if there's something particular YOU like to eat with our wines, send us the recipe: we're always excited about new food pairings!

Your friends at Von Holt Wines

Commenting has been turned off.