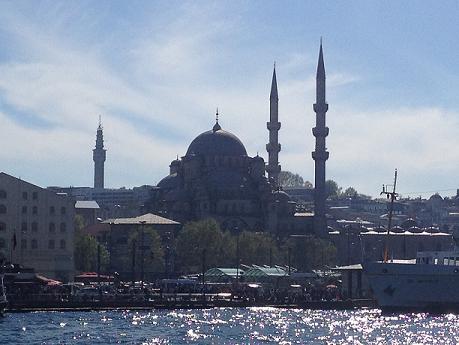 On our recent trip to Istanbul, we were astounded and delighted by the sights and sounds of this stunning city. However, it was the taste and scents of this ancient culture - the tangy, spicy, smoky mezze before each meal; the briny, pine-accented breeze off the Bosphorus; the notes of violet in our honey and loam in our tea; and of course the Spice Bazaar itself, redolent of apricot and sumac - that really sparked our imaginations. In that spirit, for the first in our wine pairing series, we thought we'd pair our 2010 Hoppe-Kelly Syrah, with its hints of spice and black fruit and nose of violet, with a classic dish dating all the way back to the early days of the Ottoman Empire: Lamb Moussaka.

This recipe serves eight, and for ease of cooking, I've separated the pre-assemblage process into three discrete steps, each with their own list of ingredients, so be sure you have everything on hand, including at least one large skillet, one medium saucepan, and one two-quart casserole pan, before you begin.

Melt butter in a large skillet and saute onion on medium until transparent, then add the minced garlic just for the minute it takes to get aromatic. If you have it available in your spice pantry, I'd strongly suggest adding the sumac to this mixture of alliums, as it'll give them a little tartness to help brighten up some of the richer flavors. Regardless, after the garlic has released its flavor, add the ground lamb and increase the heat slightly as you stir to brown. Add the tomatoes, dill, parsley, and tomato paste, stir until incorporated, and reduce heat to low. Cook, stirring occasionally, for 15 minutes, then turn off the heat or remove the mixture from the pan entirely and set it aside.

When working with zucchini in casseroles, it is advisable to cut them into slices ahead of time and, salting each layer, lay them in a colander during the rest of your prep time (and up to two hours ahead of time). Then gently press them with paper towels when you remove them for use. This will help remove the excess moisture from the zucchini and your casserole will better maintain its structural integrity. In any case, heat the oil in a skillet and saute the zucchini slices until tender, adding the dried oregano (and salt, if you haven't used the salt method to dehydrate your zucchini) about halfway through. Remove from pan and set on paper towels. Peel and slice potatoes, and brown on both sides in the same pan, seasoning with salt and pepper to taste. Set aside.

Melt your butter in a medium saucepan and slowly integrate the flour while stirring until you have a smooth paste. Also slowly, drizzle in the hot milk (which I begin heating over a low temperature while cooking the potatoes), still stirring, until the entire mixture is smooth and thick. Mix in the slightly beaten eggs and the grated cheese, and cook for two minutes before seasoning with the dill, nutmeg, and salt and pepper to taste.

Preheat your oven to 350 degrees.

Lay the potatoes from step two across the bottom of a two-quart casserole dish. Cover with half the lamb-tomato mixture from step one. Then layer half your zucchini, the remaining half of the meat mixture, and the final half of the zucchini slices. Pour your cheesy "pudding" from step three over the top, then put the whole casserole in the oven and bake for 50-60 minutes (50 usually works, but if you're a late pre-heater or a compulsive oven opener, give it 60).

Let rest for 10-15 minutes, pour yourself a glass of Von Holt Wines' 2010 Hoppe-Kelly Syrah, and enjoy the fruits of your labor with the fruits of ours.

Let us know how you liked this food pairing in the comments section below, and stay tuned for our next installment in this series. Also if there's something particular YOU like to eat with our Syrah, send us the recipe: we're always excited about new food pairings!

Your friends at Von Holt Wines

Important Software Message
@ Mar 21, 2015 at 9:05 AM
http://freesoftwarediscounts.tumblr.com/post/114047001284/bitdefender-sbs-security-3-years-2000-pcs-discount
Hello! I simply would really like to give a huge thumbs up for the good data you have here on this post. I'll probably be returning again to your weblog for more soon.

louisville plumbers
@ Mar 24, 2015 at 11:32 PM
http://www.rfwsqadfe.net
Pretty great post. I simply stumbled upon your weblog and wanted to mention that I've truly loved browsing your blog posts. After all I will be subscribing in your feed and I hope you write once more very soon!

title loans online
@ Apr 12, 2015 at 4:50 AM
http://www.dmc-rappresentanze.it/?option=com_k2&view=itemlist&task=user&id=10925
In today?s world, there are lots of people that aren't able to meet their requirements for a passing fancy salary. These will be in place to guard consumers like you opportunistic lenders.

Google Sync is required to synchronize your Gmail,.

auto title loans
@ Apr 13, 2015 at 8:13 PM
http://www.induguadua.com/?option=com_k2&view=itemlist&task=user&id=9113
However, it is going to be for the amount with the transaction only rather than to the entire vehicle. It is nearly easy for a person having good credit to borrow money but to the people with bad or damaged credit it can be very difficult to acquire loan.

where to buy dishwashers maytag
@ Apr 28, 2015 at 1:58 AM
http://www.serenomiami.com/?option=com_k2&view=itemlist&task=user&id=86946
However, dishwashers have occasional glitches, for example not advancing after dark wash cycle.

Nelson
@ May 7, 2015 at 12:34 PM
http://www.beestessays.com/
Education helps us to get informed about the latest designs of jewelries, clothes and many other goods. It is the education which helps us to make the things more attractive, beautiful and astonishing for the people.

bosch ada dishwasher
@ May 14, 2015 at 2:15 AM
http://www.c-enter.com.mx/?option=com_k2&view=itemlist&task=user&id=5046
Frigidaire is really a company that manufactures and sells a various household appliances, including fridges, stoves,.

my aol email
@ May 21, 2015 at 2:42 AM
http://tcemi.org/?option=com_k2&view=itemlist&task=user&id=47314
Many search engines like google, including AOL Search, contract their results in the market to larger yahoo and google.

paypal login
@ May 22, 2015 at 4:57 PM
http://https://www.biogreensforlife.com/index.php/component/k2/itemlist/user/64994
Fill out the business information form for the next page and click on "Continue" to complete your upgrade to a business account.

yahoo.com login
@ May 23, 2015 at 1:23 PM
http://www.mobilityathometn.com/component/k2/itemlist/user/62392
Click the "Mail" option for the left side in the page to go to your Yahoo. Mail contact list with whom you no longer communicate, you are able to remove.

outlook email login
@ Jun 18, 2015 at 3:49 PM
http://ttlink.com/tanishask/all
Go towards the Home screen on your own Android phone and tap the "Android Market" icon.

aol mail sign in
@ Jul 2, 2015 at 1:32 AM
http://gaming-district.com/profile/3442/ReinaldoCol/
Read the conditions and terms before clicking submit so which you know AOL's expectations.

yahoomail
@ Jul 9, 2015 at 11:23 AM
http://www.laminasycortescarvajal.com/?option=com_k2&view=itemlist&task=user&id=44678
Right-click it and select "Copy," then right-click on the desktop and select "Paste.

my aol mail
@ Jul 23, 2015 at 12:20 PM
http://quadleft.com/restaurant/what-everyone-is-saying-about-aol-email-sign-is-dead-wrong-and-why
Your AOL email account likely has your address book stored upon it.

amex zag car buying
@ Jul 24, 2015 at 4:01 AM
http://immigrationlawyer.com/uncategorized/5-tips-american-express-login-cant-afford-miss/
If you need to American Express bank card and would choose to save on postage, you'll be able to pay your bill online. While the standard American has four cards, as outlined by MSN Money, that doesn't mean they see the details about how exactly their.

paypal login
@ Jul 24, 2015 at 7:37 AM
http://www.griefplay.net/entry.php?19076-Your-Key-To-Success-Paypal-Account
Select the "Shipping Calculations" tab on the profile homepage.

citicards login credit card account
@ Jul 27, 2015 at 12:23 PM
http://tamezendegi.com/groups/the-ultimate-secret-of-citicards-secure-sign-in/
If a client charges $3,000 at 0 percent and after the incidence expires charges $500 on the normal rate, then every payment the consumer makes go to toward the 0 percent balance. Whether you lost your career, had a surprise bill turn up or just spent a lot more than you could afford, if you are able to't.

www facebook login
@ Jul 29, 2015 at 8:17 AM
http://www.addaexpert.ro/?option=com_k2&view=itemlist&task=user&id=148869
But if I were to enter Chad Irwin and I found the other result since the first one and I cannot find anything related towards the Chad Irwin that I know anywhere with this list or any with the more results here then that will give me a great idea if I ended up being blocked with this person. These settings usually do not control photos that you might have been tagged in.

healthy fast food near me
@ Jul 29, 2015 at 11:15 AM
http://www.poligry.ru/index.php?option=com_k2&view=itemlist&task=user&id=65176
You can find an item and possess it shipped towards the recipient without ever laving your home.

ebay.come
@ Jul 29, 2015 at 8:51 PM
http://carlosvicente.com.br/?option=com_k2&view=itemlist&task=user&id=221047
The best part in the e - Bay clone procedures is involved lies inside the fact how the clone sites are capable of having all the features and applications which the original e - Bay site provides to its customers who're outnumbering any such organization at present.

Buford
@ Aug 15, 2015 at 4:54 PM
http://url.com/
Whoa! This blog looks exactly like my old one! It's on a completely different subject but it has pretty much the same layout and design.Superb choice of colors!

neo-kinisi.com
@ Aug 19, 2015 at 1:26 PM
http://neo-kinisi.com/index.php/component/k2/itemlist/user/180905
Enter the first few characters on the username on the person you wish to invite, and select her name on the list of potential matches. Hover on the pin and click on �Comment� to leave a brief comment in regards to the pin.

Darell
@ Aug 21, 2015 at 8:51 PM
http://twitter.com/EraOrganics/status/603728925353709568/
It is perfect time to make some plans for the long run and it's time to be happy. I've learn this post and if I could I wish to recommend you some fascinating issues or tips. Perhaps you could write subsequent articles relating to this article. I want too read even more issues approximately it!

Dr. Robert Jack
@ Aug 30, 2015 at 1:49 PM
Here comes an Affordable loan that will change your life for ever, I am Dr. Robert Jack a certified loan lender, I offer loan to individual and public sector that are in need of financial Assistance in a low interest rate of 2%. Bad credit acceptable,The Terms and Conditions are very simple and considerate.You will never regret anything in this loan transaction because i will make you smile. Our company has recorded a lot of breakthroughs in the provision of first class financial services to our clients, especially in the area of Loan syndication and capital provision for individuals and companies. We have brought ailing industries back to life and we back good business ideas by providing funds for their up start. We have a network of Investors that are willing to provide funds of whatever amount to individuals and organizations to start business and operations.i want you to understand the fact that i Dr. Robert Jack is out to help the less financial privilege get back on track by providing all type of loans to them (E.G) mortgages, home loans business loans and bad credit loans commercial loans, start-up- working capital loans, construction loans ,car loans, hotel loans,and student loans, personal loans, Debts Consolidation Loans, what are you waiting for asap why don't you try Dr. Robert Jack Loan home and be free from debts any interested client should contact me asap (dr.robertjackloans@gmail.com)
Commenting has been turned off.